& On the drive up to Denver last Friday to begin a long weekend of memorial services for departed friends, I realized that I had been well-prepared to mourn my old friend and college roomie Jerry Davies. By the end of April, Time had softened January’s raw black-on-white bad news of his death and replaced it with sad, pleasant memories. The weekend event, I reasoned, would be a reunion of old friends who would gather more for memories than for mourning. A sad time, sure. But with Jerry Davies as the centerpiece and time as the leveler of our emotions, nothing could last long without laughter.

I wasn’t at all prepared, however, to mourn for Jack O’Neill. It had been only two weeks since he laid down near an acequia in New Mexico and began to die. Before they found him and could get him to relief for his asthma-choked lungs, he was gone.

So last weekend, instead of the one I had planned on, I went to two memorial services for good friends and good men whose lungs had failed them. Jerry had been battling incurable pulmonary fibrosis for years, Jack had been trying to lessen the effects of asthma that he had fought much of his life. Jerry was 72 — too soon for him to go, of course, but at least he’d had a long time to share his gifts with the rest of us.

Jack had gifts too. And he had shared many. But he had much more to share, and I just wasn’t prepared to accept his departure. He was only 23.

I have written earlier of Jerome C. Davies, “my ancient friend, my laughing, pleasant, smart, honorable, kind, and always good friend Jerry Davies.” As it turned out, there were many, many others who’d felt the same way, and about 300 of them showed up on Saturday to sit under the soaring steepled ceiling of the United Methodist Church in Littleton. It was pretty much as I’d expected: Some religious ritual, leavened by many memories from two fine young sons and an old friend, all of whom remembered Jerry as A Man for All Reasons: A serious academic and dedicated public servant, an enthusiastic Jaycee and community volunteer, a witty and wise father (who was only dangerous when wielding a golf club), an adoring husband, a granddad who doubled as a babysitter and, despite his long residence in the clutches of a conservative community, a lifelong, dedicated Democrat.

Except for that last thing– that Democratic thing — Jerry Davies was pretty much the guy that we were told to emulate, back there in Ike Eisenhower’s Fifties. Somehow, Jerry emerged from the turbulent Sixties unlike a bunch of us and became the type of guy who holds the center in America and keeps it glued together , leaving it to others, like me, to go off pushing the envelope and flexing our freedoms. He tried to listen to, and to understand, to find reason in all sides of an issue — that had something to do with his training as a debater, and teacher, and mediator. It was evident Saturday. A lot of people sincerely admired him. And they should have.

The next day, I headed north into the high foothills of the Front Range, bound for Gates Camp near the little town of Ward, Colorado. Driving under low clouds in a low mood through those ugly, stark, jagged rocks and trashy old mining dregs near Blackhawk and Central City, I was thinking about what I’d heard of the circumstances of Jack’s death.

I still am not quite certain why Jack had to die on that Saturday before Easter, up in the hills not far from where I live. The only story I’ve gotten so far is that Jack had been in Las Trampas helping some locals clean an acequia in preparation for the springtime Northern New Mexico ritual that we on our ditch refer to as “running the water.” It’s the first step of an ancient undertaking that has been bringing water to Norte’s fields, farms and pastures for four centuries. It’s hard work, cleaning ditches. But with the effort comes something mystical. Jack would have liked it.

Sometime during the day, Jack split off from the others moving along the ditch, telling them he would catch up. And then, the story goes, several hours later he was found, near death, in the field. Emergency crews who got him into an ambulance weren’t soon enough; he died before reaching the hospital. I’ve still got some questions about what happened that day, and maybe some day I’ll get them answered.

As I turned off the Peak-to-Peak highway not far past Ward and headed into the forest on a dirt road, I frankly wasn’t expecting to find many mourners. Not because Jack wasn’t loved. He was. Not because he didn’t know many people. He did.

But Gates Camp isn’t exactly next door. It’s a rustic retreat reserved for members of the  Boys and Girls Clubs of Metro Denver. It’s off the beaten path, hard up against the Colorado High Country northwest of Boulder. According to its promo material, it’s there to give inner-city youth the chance to “challenge themselves, connect with nature, build new friendships,” and give them five days in the summer “just being a kid.” It’s the place that Jack O’Neill — who never put down roots too deeply– had made a sort of place to call home. It’s a place where he worked, helping kids be kids.

How many people, I wondered, could, or would, get up early on a Sunday to drive under threatening skies into the chilly mountains on wet, winding roads to get to a morning memorial for a 23-year-old kid?

I knew Jack had a large extended family — that of Jefferson County Open School in the Denver suburb of Lakewood. I knew he had many buddies — my son among them — from the school, and from the camp, where he had summered in a small room and counseled kids, and from his constant vagabonding, as free as a freight-car-hopping hobo. But he was an inquiring sort of hobo — he always wanted to know, he was always curious, he was always learning. And he was a straight shooter. And he was a very pleasant guy. And he was a hard worker. And you name it; if you admired a trait, Jack probably offered it.

Someday, Jack O’Neill would have been famous for something. I know that. He was just that kind of a kid. And I had to go to his memorial. I just had to.

When I got there, his huge family had already arrived. I had to park in the cheap seats. The place was littered with cars. And inside the big Gates Camp lodge, it was jammed. Young and old. Bearded and beaded. Teachers and students. Parents and grandchildren. Hipsters and oldsters. They’d come long distances, some from far away. California, Washington. Young people can pick up and move fast, and they got to Gates Camp. There wasn’t much that could stop them.

For me, it was another 300-person memorial, but one of a different sort.

There was no soaring edifice, no pews, no printed program, no religious trappings or ritual — unless, of course, you regard the ancient smudging ceremony of Native Americans as a religious experience.

We all went out onto the open ground beside the lake, held hands and formed a gigantic circle. We stood there, listening to the eulogy of former camp director John McCluskey, his non-amplified words carrying through the cold air across the ring of mourners. He talked of Jack’s love of the earth, and the many places he had gone, the  things he had done, and the people he had touched in his young life.

“Jack loved beauty and he evoked that in a special way in each of us,” McCluskey said. “As we say here at Gates Camp, he fed the Good Wolf… He lived an authentic life of meaning, and out of that he woke something up in each of our own hearts.” (The full text of McCluskey’s remarks is here. It’s recommended.)

Sticks of the smoldering sage were passed along the line for each of us to spend a few moments allowing the smoke to curl around our bodies and, the Indians say, free us from negative things and set the world upright again. 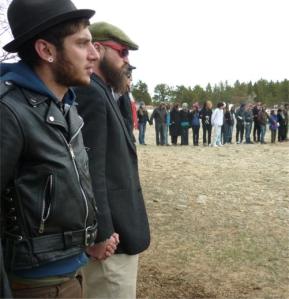 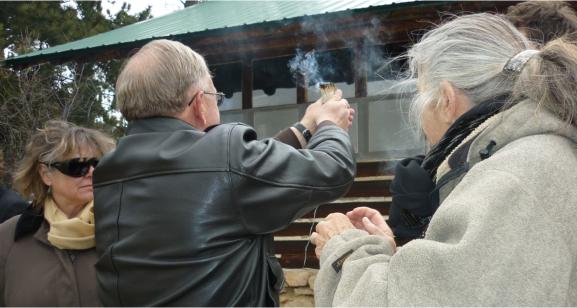 I’m not much for supernatural stuff, but when the smudging stick got to me, I held it for while and bathed a bit in its smoke. And I felt a little better. 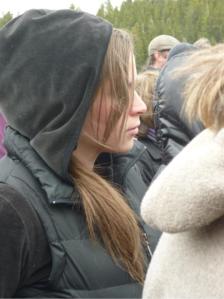 And then we closed the ring, and knotted up to listen to a song, put our arms around each other, and try, not successfully, to hold the tears back. I saw a beautiful young lady’s tears moisten the dark locks that hung down to her cheeks; I saw a older guy with his handkerchief to his nose. I heard sniffles from my son. I saw a tear drip from the cheek of a lady and darken a spot on the bosom of her light gray sweater. And, more than once, I put the knuckle of my index finger to the corner of my eye. 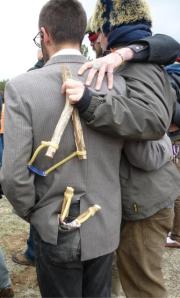 Then I had to leave — it was a long drive back to New Mexico, and snow had been promised along the way. After I’d gone, I’m told, most of the people hung around the camp for a long time, visited the cabin where Jack had thrown his roll, and sitting around in the lodge eating, and telling story after story. And then came the “30-slingshot salute”, when his friends — wielding stocky, home-made, decorated slingshots, fired missiles into the lake. Something Jack had probably done a lot with the kids he counseled. In the afternoon, carrying cards with Jack’s picture on them, they began to drift away.

I kept my card. It’s got a great picture of Jack on the front, and a beautiful, specially written piece of poetry on the back, written by Micah  Springer, a friend of the family. This poem leaves no doubt that she really knew Jack O’Neill.

When a family buries a sun

Dawn was dim today.
More grey than blue, as though rays were missing
Or is it more effulgent
did light return  home

Visionary, Adventurer,
hands in the dirt,
We all watched you,
one of our brightest.

Scorched moth wings flying too near the flame,
Teasing, but always safe, just a little wax.
Until that afternoon

Jack O’Neill
Is it a tragedy you died too young,
Or a miracle that you shined here
so long.

I’m going to miss you, my buddies Jerry and Jack. I’m glad that both of you miracles shined here. I’m a better person for it.

Published by An Old Gringo's Gazette

View all posts by An Old Gringo's Gazette

10 thoughts on “Memories of a couple of miracles”

The voice of the grassroots JFK research community!